We’re here to answer your questions about admissions, financial aid, transfer credits and more. Fill out the form below to get in touch with a helpful admissions counselor.

The National Security Agency (NSA) and Department of Homeland Security (DHS) have designated UD as a National Center of Academic Excellence in Cyber Defense Education.

Enhance your Cybersecurity Career with a University Known for Greatness

The University of Delaware actively cultivates strategic working relationships with prominent employers in government, military, finance and business who are dedicated to excellence in cybersecurity. Our online master’s degree in cybersecurity prepares you to address the need for qualified professionals who specialize in protecting important data and assets.

UD’s online master’s degree in cybersecurity teaches you to step beyond traditional IT roles to design, execute and evaluate solutions that can stand up to today’s increasingly sophisticated cyber attacks. 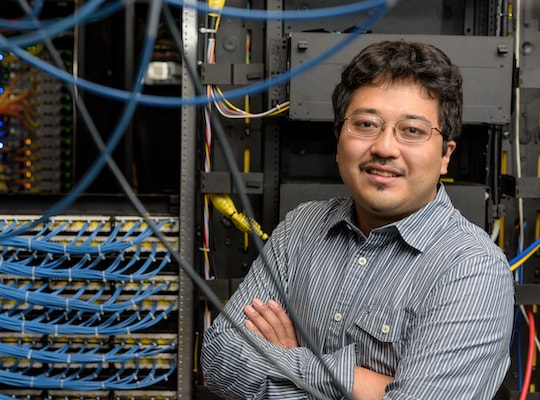 UD’s online master’s degree in cybersecurity gives you theoretical perspectives and a comprehensive skill set that qualifies you for growing opportunities in a variety of industries.

Develop Systems that Can Withstand Hackers and Data Breaches

In your online cybersecurity courses, you’ll go beyond IT to examine advanced computer and network security concepts and defensive techniques. Our program utilizes the latest research in the field to bridge theory and problem solving so that you’re prepared for your ideal cybersecurity career.

In 30 total credit hours of coursework, you’ll take classes with topics including:

Our graduate application system is designed to put you in control of not only the application but all documents associated with it. We have designated areas within the application where each required document should be uploaded. You’ll need:

We work hard to keep our tuition affordable while maintaining the highest academic standards. Our Tuition Calculator will help you estimate the total cost of your program.

In addition to a variety of scholarships, you could fund your program by receiving a grant, qualifying for federal or private loans, utilizing military benefits or pursuing employer tuition reimbursement. Our dedicated admissions and financial personnel will help you through the process, including enrollment in a payment plan if applicable.

Chase Cotton (Ph.D. EE, UD, 1984; BS ME, UT Austin, 1975) has been a successful researcher, carrier executive, product manager, consultant and educator for the technologies used in Internet and data services in the carrier environment for over 30 years.

In the mid-’90s, as the commercial Internet began to blossom, he transitioned to assist carriers worldwide as they started their Internet businesses including Internet Service Providers (ISPs), hosting and web services, and the first large scale commercial deployment of Digital Subscriber Line (DSL) for consumer broadband services.

In 2000, Dr. Cotton assumed research, planning and engineering for Sprint’s global Tier 1 Internet provider, SprintLink, expanding and evolving the network significantly during his 8-year tenure. At Sprint his activities include leading a team that enabled infrastructure for the first large-scale collection and analysis of Tier 1 backbone traffic and twice set the Internet 2 Land Speed World Record on a commercial production network.

Since 2008, Dr. Cotton has been at the University of Delaware in the Department of Electrical and Computer Engineering, initially as a visiting scholar, and later as a Senior Scientist, Professor of Practice and Director of Delaware’s Center for Information and Communications Sciences (CICS). His research interests include cybersecurity and high-availability software systems with funding drawn from the NSF, ARL, CERDEC, JPMorgan Chase and other industrial sponsors. He currently is involved in the educational launch of a multi-faceted Cybersecurity initiative at UD where he is developing new security courses and degree programs including a minor and MS in Cybersecurity.

Dr. Cotton currently consults on communications and Internet architectures for many carriers and equipment vendors worldwide.

Faculty Are Readily Available to You

Earning your degree online at UD is not a solitary journey. In addition to hearty conversations with peers and faculty within discussion posts, you’ll email, text, talk and video chat with peers and professors throughout your courses. You’ll also build relationships and join a supportive professional network, just as you would if you were on campus.

We pride ourselves on teaching and innovation, so you’ll encounter an advanced digital curriculum delivered by experts. Knowledgeable staff members are available to answer questions by phone, chat and email, and you can access technical support 24/7.

We’ve provided answers to the most commonly asked questions about UD’s online programs. If we missed anything, you can get in touch with a knowledgeable admissions counselor by phone at (844) 237-1338.

You can earn your degree in as few as 2 years full-time or complete the program part-time at your convenience.

Yes, both the National Security Agency (NSA) and the Department of Homeland Security (DHS) have designated The University of Delaware a National Center of Academic Excellence in Cyber Defense Education. Our program combines theoretical foundations with practical applications to prepare you for growing cybersecurity careers.

UD’s Cybersecurity Initiative offers you networking opportunities through partnerships with government, private and academic organizations such as the U.S. Army, JPMorgan Chase, IBM, GE, Bank of America and more.

The first step toward applying for this program is to complete your online application through the graduate student Application Management System.

Yes, this program accepts up to nine transfer credits with the approval of the program director.

You may start this program in the fall, summer or spring semesters. Applications are accepted at any time up until a week before classes begin. Applicants are considered for admission on a rolling basis, which makes now the perfect time to apply.

Take Charge of
Your Future

to speak with an admissions counselor